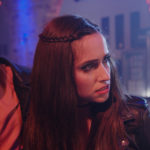 Killian has been Halley’s best friend since the start of high school. They met when they were fourteen and immediately began to get into trouble. Killian carries a torch for Halley’s brother Malchior, but out of respect has never pursued anything more than friendship. Killian grew up with a little brother named Clarke. Her mother […]

Spell Bent is supported by

Beevision Productions Inc. does not accept unsolicited materials. They’ll be destroyed. Thank you.